Browse the beautiful Native Indian art world and you will find it replete with fascinating pieces of high quality, vivid colors, and authentic touches. But what many are surprised to find is that there are stories behind the art. Most art work is known for beauty or statement; the authentic artwork of Native Indians, however, will nearly always tell a story as well.

Mythologies
Much Native Indian artwork tells stories from mythology. From creation myths to the power of the wind, from women who become mountains to waterfalls representing tears or veils, the stories of the Native Indians show up in their artwork. Skywoman, in all her various forms coming from the mythologies of numerous tribes, is a popular choice in Native Indian artwork. From carvings of trees on turtles’ backs–representing the part of the story where Skywoman lives on a great turtle’s back before land is created for her–to beautiful paintings of Skywoman talking with the animals who helped her to survive, mythology-based artwork shows an interesting part of Native Indian stories. 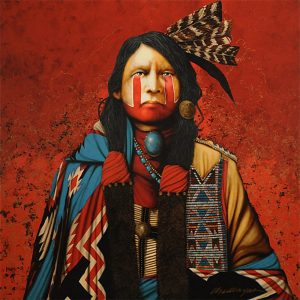 The many fruit-depicting still-lifes that novice artists practice their craft on aren’t like still-lifes in Native Indian art, where the simplicity of corn can tell a story. Many Native Indian cultures have stories of corn coming to the people. Called “Indian Corn” or “Green Corn” or “Maize”, the corn in artwork represents the blessings of having struggled and prevailed in life. This idea comes from the story of Wunzh who fasted for seven days, and in his visions wrestled with another brave and prevailed. The brave told Wunzh to bury him and corn would grow from the ground that he was buried in. Corn can also represent Corn Goddesses who represent the fertility of the land and people. 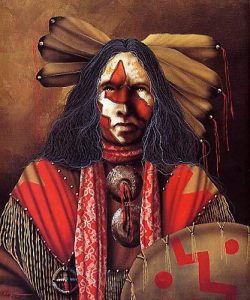 Nationhood
Another popular theme in Native Indian art is the concept of Nationhood. Many people don’t understand that Native peoples are part of sovereign nations unto themselves. The art, however, shows this in vivid ways. Often, Native Indian art shows the strength of their past when they conquered others or prevailed against invaders. Or the art will depict a specific animal to represent the nation and the animal will be shown with specific native art techniques, showcasing the Nation’s individuality and purpose.
The art coming from Native Indian Nations today is an effort to combine the stories that make them who they are with modern sensibilities of who they can become. Current Native Indian art wants to throw off the shackles of prejudice and stereotype, and so often portrays simple humanity so that everyone can understand something more about themselves. For more information, speak to experts, like those at Cheryl’s Trading Post.