One hundred and sixty-two years ago in an attempt to grasp the essence of Russia prince Vyazemsky remarked, “from thought to thought one must gallop hundreds of miles.” This idea confirms that the perception of space in Russia has always gravitated to the extremes with total disregard towards what lies in-between. After the Revolution, this polarity acquired hysterogenic dimension which was caused on the one hand by the suffocating closeness in the relationships between the tenants of overcrowded communal apartments, and on the other by the overwhelming presence of the vast caesural territories. In the former USSR, the notions relating to a sense of space (such as migration and travel) would frequently be substituted for or confused with those connected to temporality (be it Futuristic sentiment or searching for “temps perdu”). Reflecting upon this phenomenon, the Moscow artist and theorist Andrei Monastyrsky places Ilya Kabakov’s conceptualism and his own performances of the late 1970s and early 1980s within what he calls the “ontology of surface (space).” He contrasts this with Western conceptualism which for him evolves within the framework of the “ontology of action (time).” Now that it is no longer unthinkable for Russian artists to travel abroad, the dichotomy between Western and Eastern European paradigms of conceptualism seems to be losing its rigidity and sharpness. 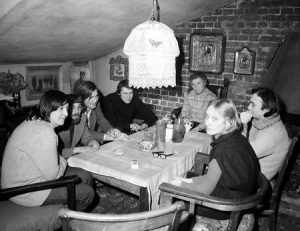 Kabakov and Monastyrsky belong to the ranks of the most influential figures in alternative Russian culture. Along with Komar and Melamid, they may be regarded as the founders of Russian conceptualism. If the Kabakovian paradigm of art as idea is based upon a metastasizing narrativity, then Monastyrsky hypostasizes conceptualism as discourse, as a theoretical enterprise. In the seventies and eighties Kabakov and Monastyrsky were chiefly responsible for the initiation into the alternative Muscovite artworld of a new generation of creatively engaged young people, a tight group of conceptual artists who announced themselves as the MANA (Moscow Archive of New Art) circle, or in a later transcription, NOMA. To designate the artists’ place in the history of Muscovite (neo)conceptualism, as well as that of the CA (1) performance group led by Monastyrsky, an excursion into the past is called for.