‘The British Art Show, 1990’ (Glasgow, Leeds, London Hayward 14 June-12 August) selected by Caroline Collier (South Bank) Andrew Nairne (Third Eye, Glasgow) and David Ward (Lecturer at Goldsmiths) is an exciting and refreshing exhibition. All the artists are young and half of them are women. The work is, for the most part, really stimulating; addressing issues that often get shoved to the sidelines in large exhibitions. Included is the astonishing ‘Light at the End’ by Mona Hatoum, drawings by Lesley Sanderson, in which she explores the construct of the Oriental and exotic woman through her self-portraits, several pieces by Sonia Boyce and sculpture from Cornelia Parker, Louise Scullion, Veronica Ryan, Cathy de Monchaux and some exquisitely simple miniature boats made from single reeds by Bethan Huws. 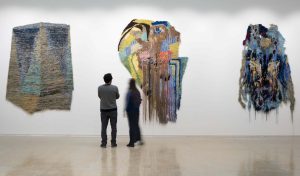 This stimulating show opened in the McLellan Galleries in Glasgow but aroused the disapproval of the Director of Glasgow Museums and Galleries, Julian Spalding (ex Manchester). Apparently the show did not deserve the title ‘British Art’ as it failed to display all the great and the good of whom Britain should feel so proud. The argument ran that Glasgow inhabitants rarely got to see ‘real’ British art ie. David Hockney, Lucian Freud, Leon Kossoff, Frank Auerbach, Anthony Groan (sic), Peter Blake, Sir Edouardo Paolozzi, etc, etc.

So, the ‘Great British Art Exhibition’ opened in the same galleries a week after ‘The British Art Show, 1990’ closed. As we all know from long experience, when the word ‘Great’ appears you can bet that women will be excluded almost as a matter of course. Out of 56+ participating artists only eight were women (if one includes the two female members of the Boyle family). To a large extent these were somewhat predictable choices: Bridget Riley, Gillian Ayres, Paula Rego, Margaret Mellis, although the inclusion of Susan Hiller and Jo Spence made the mix more interesting.

Of the young blood it was almost exclusively those new Glasgow Boys: Ken Currie, Steven Campbell, Peter Howson and Stephen Conroy. All the other blokes were at least 2000 years old.