Almost any group exhibition floorplan resembles a rabbit warren but entering the Temporary Contemporary one actually looked down on the display, over and into the cubicles and dividers separating artists’ work according to museological custom. Given this vista, an overview of the themes of “1965-1975: Reconsidering the Object of Art” was also possible: On Kawara’s magenta triptych mingled political and linguistic orders with the text “ONE THING / 1965 / VIET-NAM”; to the left, a wall of Bernd and Hilla Becher water towers stood for photographic and serial processes interrupting spontaneous markmaking; meanwhile, a gush of blown air from above, courtesy of Michael Asher, reminded you to keep alert to the often effaced management of institutional space which produced the scene in the first place. A neat and tidy packaging of conceptual art, so far.

However, it is debatable whether Asher’s piece signaled a blast of fresh, bad or hot air as a comment on Ann Goldstein and Anne Rorimer’s curating of the exhibition. His drafty, barely sensible presence at the vistapoint made me recall installation procedures of old. Photographs of early group exhibitions from the period covered show works in crowded, indiscriminate jumbles – canvases, pinned photographs and typed texts by different artists sharing wall space, mounds of string, junk and other things on the floor. Goldstein and Rorimer avoided those “things” (no example of what they call “materially defined” sculpture was included) and kept canvas to a minimum (Kawara, John Baldessari and Allen Ruppersberg excepted). As well, they put stress on bringing together short, distinct intervals from individuated oeuvres, so the show became a series of solo arrangements linked by a flow-through principle. With a roster of fifty-three individuals and two groupings (N.E. Thing Company and Art & Language), coordinating coverage according to such a principle is inevitably difficult and puts a definite premium on names and positions.

The curators met this with a casual approach to precedence and ranking, and an agenda to revise the membership while retaining the concurrence of the canonical conceptual art club. Cross this attempt to redo and revise with the implications of categorizing work as either/or linguistic, photographic and institutionally critical, and you have an exhibition that tries to achieve a lot by applying fairly conventional, officialized criteria. Each work bore an imaginable caption, as if this one were the architectural critique (Gordon Matta-Clark) while this other was the whimsical reconstruction using odd materials (Ed Ruscha’s Chocolate Room). You could say that while conceptualism rethought the art object, its curators saw little need to rethink the idea of the artist as equity. 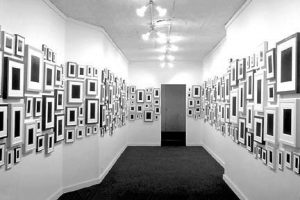 Their strategy made some improvements on Claude Gintz’s unfocused and hardly revisionist “L’art conceptuel, une perspective” from 1989, even as it brought problems of emphasis. Bowing to recent interest in retrieving body arts, videos by Joan Jonas and Yvonne Rainer were exhibited, although this begged the question of the formative context of Fluxus, minimal art and other anti-conceptual performative and phenomenological pursuits in determining the body’s “artfulness.” As well, where was Chris Burden amid a decided local enthusiasm for Californian artists? True, such regard gave Bas Jan Ader and Eleanor Antin deserved attention, but Bruce Nauman suffered from the exclusion of sculpture and there was little reason to include William Leavitt’s California Patio. In general, European artists were ill-served by the sculptural restriction too, for the materials in arte povera and related activities crucially “reconsidered” and pointedly, by a jejune nomadism, “politicized” art. On the up side, the domesticated palms and colonial exoticism of Marcel Broodthaers’ Un jardin d’hiver held more “old world” irony in Los Angeles and one could tour the city (by car) and rarely seem far from one of Daniel Buren’s striped bus benches providing a condensation of the deeply disturbed civic ambiance.

Some fairly predictable entrants were extremely well-served, with a considerate selection of early Richard Long walks and much crisp, obviously reprinted, documentation of Vito Acconci “private” and institutional performances. The Dan Graham selection was limited to his publishing projects, to good effect, while Lawrence Weiner was the only artist permitted to roam the galleries – his signage showing up in several locations. Others, puzzlingly, were represented in almost slighting fashion: a single 1973 Sol LeWitt wall-drawing in a cramped alcove when his mid-sixties sculptural projects had immense significance for any turn to serial procedures; a trio of Stanley Brouwn drawings with no indication of the parameters of their production. Both these presentations mislead; so does Acconci’s remaking and forgetting that Long has continually made palpable sculpture and that Weiner used to act out some of his statements. (One might also ask why Graham’s Sadean Base Ball Piece got cut?)

I may have overstated the tidiness of this picture of conceptual art because there appeared to be little conflict over (or reconsideration of) artistic practice in the installation. Moving from gallery to gallery was like proceeding along a receiving line, meeting renowned figures and some lesser-known faces – all rather formal – and followed a paradigm wherein conceptualism fills the gap between minimalist installation and socially attuned interventions under the rubric “postmodernism.” All is to the good; liberal piety is satisfied and remains as intact as the art market that so skillfully, and with conceptualists’ participation, made the pieces of paper into objets de luxe. Approaching conceptual art from a concentration on those objects – faithfully repeating period rhetoric – may be an efficacious way to mount a show of this scale, yet it ultimately replaces the masterworks’ title with the artist’s proper name.

Luckily, Lucy Lippard qualifies this approach in her catalogue essay and, although admitting to an untrustworthy memory and centering on Manhattan, she does acknowledge political contention in the Art Workers Coalition as well as “certain (unprecedented) support for the feminist program” among male conceptual artists. Not only does this counter the predisposing of conceptualism as apolitical and masculinist, it encourages Lippard to discuss activist art which Goldstein and Rorimer mostly ignored. Coincidentally, up the hill at MOCA’s permanent site, several of the women artists Lippard mentions – Martha Rosler, Mary Kelly and Mierle Laderman Ukeles – were represented with period work in a touring exhibition called “Division of Labor.”

To suggest that conceptual art exhibitions should look like masterpiece shows, where Rubens rubs up against Van Dyke or Manet hangs with Bouguereau, may sound heretical, but the installation here dramatically proved the inadequacy of galleried isolation. One could conceive of the decade covered as the time when the avant-garde moved from the indiscriminate, multi-media group exhibition to personalized, cellular gallery divisions. Robert Smithson, in “Cultural Confinement,” asked whether “certain exhibitions have become metaphysical junkyards? Categorical miasmas? Intellectual rubbish?” His provocative categories are too harsh for this exhibition whose flaws stemmed from an uncritical address to a fundamentally critical art. The most salient example of thoughtlessness was the late announcement of the sponsorship of the exhibition by Philip Morris, noted cancer and Jesse Helms encouragers. In the protests that followed, Hans Haacke posted a statement by his infamous Shapolsky et. al. piece noting Philip Morris’ nefarious actions and arguing that to pull out would be to concede the curatorial function to the corporation. The day I visited, Adrian Piper requested that her room be cordoned off and proposed an alternate installation of photographs of her parents, both recently dead from respiratory diseases. At least the sequestered installation permitted this aggrieved resistance.